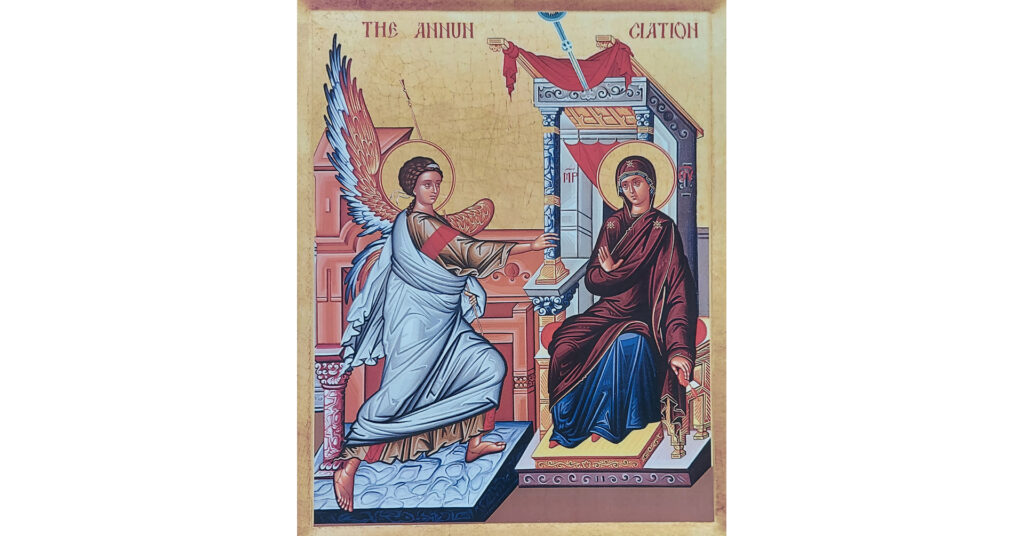 Homily offered by Father Matthew C. Dallman, Obl.S.B., for the Parish of Tazewell County on the Feast of the Annunciation, 2021

With the major exception of none other than Our Lord and Saviour, Jesus Christ, Who is the Eternal Word of God, and Whose Name—Jesus—is the Name above all other names, can there be any doubt that the most significant words ever spoken by a human being in the history of human existence have come from the utterance of Our Lady, Blessed Mary Ever-Virgin? Most blessed Mary is the Queen of Heaven, the Mother of the Church, and Our Lady of the Upper Room—her words, although some may say we have so few of them recorded by the Evangelists, drip with greatness, with sanctity, with humility, with wisdom. She herself who is the beginning in time of Our Lord’s works, was brought forth before mountains were settled, before the hills were made, even when Christ prepared the heavens, she was there—blessed Mary, Our Lady, is the soul of every Christian.

Mary is the soul of every Christian because her greatness consists in her absolute selfless devotion to Jesus her Son and Lord. To her cousin Saint Elizabeth at the Visitation, after her greeting (which made John Baptist in utero leap for joy, along with the heart of his mother, Elizabeth), Mary sang: “My soul doth magnify the Lord.” She was wholly devoted to the Lord. To the place of poverty she willingly went at Our Lord’s Nativity; to the place of shame she willingly went at our Lord’s Crucifixion and death; and to the place of promise in the Upper Room she willing went as one of the 120 apostles in the first Christian parish for the Coming of the Holy Spirit of her Son and Lord.

Should it surprise us at all that Mary is the soul of every Christian when within her heart from the first was her Son’s Name; within her heart from the first was the Name Jesus, the Name above all names, the Name which is a fortified tower to which the righteous run and are safe; the Name we will walk in for ever and ever; the Name which saves everyone who calls on it? Just as among the first things known to Blessed Joseph about Mary’s Son was His Name, so was it for Mary: the Angel Gabriel giving both Joseph and Mary not merely knowledge of the Son of God, but the true knowledge of Him which is His Name. Can we doubt that Mary would say His most Holy Name all the days following her most holy Annunciation? Can we doubt that each time she said His holy Name Jesus, her heart pondered the Mystery of all Mysteries, and was filled with the awe from which comes true wisdom? Can we doubt the joy she shared with Blessed Joseph, her most chaste spouse, in the Name of their Son—a joy in His Name they knew was not only theirs, but would be the joy of all creation?

All Saints and Saint Paul’s Church