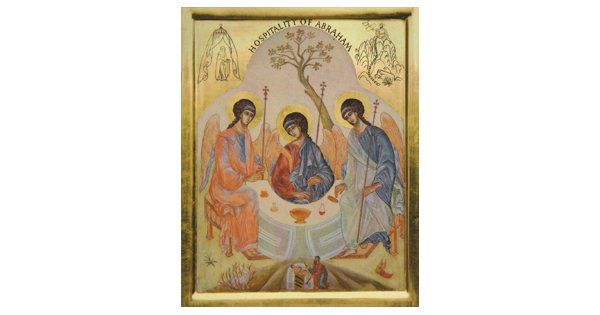 Homily offered by Father Matthew C. Dallman, Obl.S.B., for the Parish of Tazewell County on the Feast of All Saints’, 2020.

The Church’s annual celebration of All Saints’ Day is not only the patronal feast of our church in Morton, as important as that is and as blessed as we are to have the whole company of heaven interceding to God on behalf of those who gather at the white church on the corner of Plum and Chicago. It is also the case that the feast of All Saints God desires His Saints to have a living relationship with us, and He desires we have a living relationship with the Saints. A living relationship with the Saints, who themselves are not dead but living themselves is what is desired by God, Who, as the evangelists record Our Lord Jesus teaching emphatically, is not God of the dead, but of the living. All who are baptized are alive in Christ’s resurrection. So when the Church prays the Apostles’ Creed—when we pray, “I believe in the Holy Ghost, the holy Catholic Church, the Communion of Saints”—to profess this belief is to express a desire for relationship, living relationship, with the Saints: as much a living relationship with them as we have with our closest friends, even with our family. As our Collect says, God has knit together His elect in one communion and fellowship—living communion; living fellowship. The Saints are souls who want to get to know us, and want us to get to know them. And we get to know them by studying their lives, because in their lives is found the Gospel of Christ, lived out in the world.

Among the most well-known images we use to describe the Saints is the phrase, “great cloud of witnesses.” This is taken from Hebrews 12, in a glorious passage that reads “Therefore, since we are surrounded by so great a cloud of witnesses, let us also lay aside every weight, and sin which clings so closely, and let us run with perseverance the race that is set before us.” Running with perseverance the race set before us is the baptismal life, and our perseverance is especially against the bodily appetites and passions of sinful temptation, whether physical, emotional, or mental. As Saint Peter teaches us: “Be sober, be watchful. Your adversary the devil prowls around like a roaring lion, seeking someone to devour. Resist him, firm in your faith.” The race is that resistance to the devil and his ongoing temptation. But Saint Paul in his epistle to the Hebrews reminds us that by our side, in fact surrounding us every which way we look, is a great cloud of witnesses. And these Saints in their witness to the Gospel that is Christ, guide us, comfort us, and aid us—and they teach us the Gospel in their lives, for their lives in all their wondrous diversity share deep affinities with one another, as people who responded to the Light of Christ, and ordered their lives around that Light, and thereby live in ways characteristic of the Beatitudes taught by Christ—lives poor in spirit, lives that mourn, are meek, that hunger and thirst for righteousness, are merciful, are pure in heart, are peacemakers, and are persecuted and reviled by wider society.

Yet we must understand that being reviled and persecuted is the consequence of the prior activity of giving public witness to the Gospel—public witness in the world. Certainly we are to give private witness to Christ in our more or less private daily living. Yet Jesus clearly taught we are to go out into the world and proclaim Him everywhere and in all places—that is, give witness to Him everywhere and in all places. This is the activity of saints—who we are all called to be. We are not called by God to be rich in money, or even poor in money. We are not called as our primary identity to be Americans, or citizens of any city, state or nation. We are not called in our primary identity to whatever job we have in society. These are all aspects of who we are as people alive in the world today, but they are not what we are called to be primarily and fundamentally. Primarily and fundamentally we are called to be saints. We are called to give witness to the Gospel in our words and deeds in the world, in public, for others to observe.

I will conclude my sermon today with something of a teaser, like a “coming attractions” trailer we see before a feature film. Perhaps the most poignant example of everything it means to truly be a Saint who gives witness to Christ in the world is Saint Stephen the holy Deacon, and what I will be doing over the next several Sundays is preaching according to the appointed lessons and finding how they describe Saint Stephen’s commitment to Christ, as an example to all of us. Although we have the account of the death of Saint John the Baptist which came before the death of Stephen, the Church regards Stephen as the first martyr because Stephen was the first to die after the Ascension of Christ and after the Coming of the Holy Ghost—Stephen was the first to die after the Church was properly constituted as Church by Pentecost. As the feast of All Saints’ is our great reminder of the cloud of witnesses ever living around us, Stephen is the great reminder that the English word “witness” derives from the Greek word we translate as “martyr.” To be a martyr is to be a witness to Christ; to be a witness to Christ is to be a martyr. Martyr means witness to Christ before it means being put to death. Because we are all called to be witnesses to Christ in our daily lives, we are indeed all called to be martyrs.