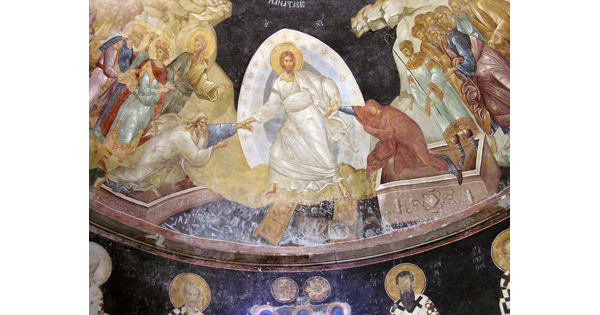 Offered by Father Matthew Dallman, Obl.S.B., for the Parish of Tazewell County on the Sixth Sunday of Easter, 2019

I have had one occasion when a teacher of mine has become a true friend. In all such occasions, the relationship (if we had much of one at all, and of course sometimes we do not, and that is perfectly fine) never moved beyond teacher and student. With many teachers I have had a cordiality, a certain friendliness. But we, with one exception, did not become true friends. And by “true friend,” I mean that in the traditional sense: friendship not of utility (what you do when you both happen to be in the same place for a stretch of time), not of pleasure (based on shared emotions that come but pass away), but of friendship based on deep love for each other, each seeking to bring out the best in the other. This is a selfless kind of friendship, and yet it is also the kind of friendship where you may go long stretches of time between conversations, years even, and yet the moment you both talk again, the bond between the two immediately returns, along with the selflessness.

The what is called the “farewell discourse” of Jesus captured by Saint John in chapters fourteen through seventeen of his Gospel, from which our gospel passage today is extracted, Jesus says, “No longer do I call you servants, for the servant does not know what his master is doing; but I have called you friends, for all that I have heard from my Father I have made known to you.” This is not friendship of utility or pleasure. His friendship to us is of the most profound kind, so profound as to pass our understanding and exceed our desire. He always has our best in mind, He always sees us for our best selves. He sees us even for our heavenly selves; for although we have not yet passed through our chronological existence of time and space, Jesus sees us beyond our time and space selves. And like a true friend would do and give anything to help his or her true friend in time of need, Jesus would do anything to help us toward salvation—and indeed He has, by taking our flesh and giving of Himself on the Cross, to redeem humanity and justify us to be able to receive forgiveness as much as our repentant selves might need to be forgiven.

The recognition of the presence of Jesus in His resurrected and glorified Body was a progressive recognition. Although Jesus is always presence, and we can go nowhere to escape the presence and eyes of God, the purpose of His life and death was not to make Himself present (which He always was, is, and will be) but available—that is, able to be recognized. And being recognized, thereby received. An analogy with the natural world might be helpful: trees and plants need nitrogen in the soil. But pouring liquid nitrogen near a bush will do nothing for its growth, despite the necessity of nitrogen. Nitrogen given to the bush, if it is going to be helpful, is presented in a way that it can be received, through the fertilizer formula. God’s presence is everywhere and in all places, but like a bush, to receive His presence through recognizing it demands careful preparation on the part of the Gardener.

Jesus is our Gardener, as He was to Mary Magdalene, and His life and death on the Cross is the preparation for His friends to be able to receive Him after His death. For three years, He taught them so that they could recognize the invisible: recognize His words; recognize His gestures; recognize the marks of His presence and the great works of His holy Being. The prophet Joel speaks of recognizing God through the wilderness being green, the tree bearing fruit, the fig tree and vine giving full yield—through the early and late rain, and through receiving back what is lost. Our first hymn today, a favorite of many of us, especially us of British descent, speaks of recognizing Him through the little flower that opens, each little bird that sings. He gave us eyes to see them for the greatness of God’s actions through their very being, their existence.

This is the sacramental principle of creation. The lush wilderness, the yielding trees, the rains, the flowers and birds, and all the rest of God’s creatures—because He made them and all things are His creatures. They are visible signs of grace perceived inwardly and spiritually—that is to say, received inwardly and spiritually. And the same holds for the voice that calls our name, the stranger who meets us to discuss God, the woundedness people allow us to see, and the miraculous abundance, whether 153 fish or the birth of a child, we enjoy not of ourselves but from a mysterious source, which of course is God.

The recognition of the early Church in the days after the mighty Resurrection but before the glorious Ascension were days when the Church was gaining new eyes—the eyes of faith—eyes that allowed them to perceive Jesus in His resurrected and glorious Body, and begin to be able to see Him—that is perceive Him with the eyes of faith—everywhere and in all places. That fact came firmly with the Ascension—the purpose of the Ascension is to teach His presence is no longer strictly local, but in some sense both local and universal at the same time. But let us see that for Him to dwell in us, and we in Him takes eyes of faith, and a heart that keeps the words of Christ, pondering them like Mary pondered. Let us see that to become not present—because He is always present—but recognizable was the task Jesus had in the days after His resurrection. And let us see as well that Our Lord accomplished His task, because the early Church, first confused and perplexed, because full of joy, became full of grace, because like Mary always was, and did so only through the grace of her Son, our Lord, Jesus Christ.

All Saints and Saint Paul’s Church