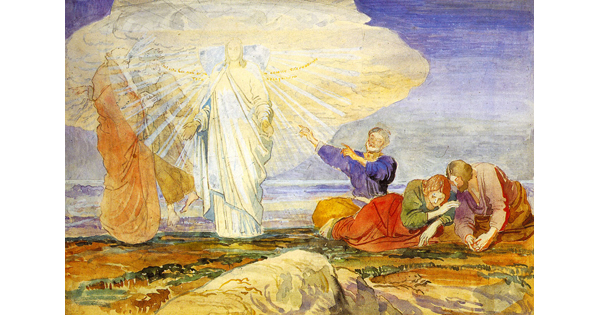 Offered by Father Matthew Dallman, Obl.S.B., for the Parish of Tazewell County, on the Last Sunday after The Epiphany, 2018.

God’s glory has been revealed on the holy mountain. To Saint Peter, Saint James, and Saint John, the beloved Son of the Father was transfigured before them, His garments glistening, intensely white. Indeed He showed Himself forth as Light from Light. They thought it was the culmination of their lives on earth. They were in awe that this was the end time, that this was God’s final kingdom. “Exceedingly afraid” means filled with awe and wonder, filled with holy fear. “Master, it is well that we are here,” Peter said. They were not frightened, not incapacitated, nor struck mute: they were being stretched: stretched in their thinking, their perception, their entire reality, and they would never return to their former consciousness. When you encounter God, you can never return to who you used to be.

Sight in the Christian way means seeing in a new depth, a richness never fathomed before. Taste and see that the Lord is good. And this is a depth we participate in, and are invited to perceive by God’s grace and our cooperation with Him, throughout the Mass: the Word of God is proclaimed and through it we are invited to see a new depth, which it must have because it is biblical teaching that it is always Christ who proclaims Scripture during the Mass; and perceiving in a new depth reaches its climax in the Liturgy of the Eucharist, as we are invited to behold the Lamb of God who takes away the sins of the world. Every Mass is a journey by us, the people of God, up the mountain. Every Mass is a window to heaven, a participation in the kingdom of God.

As Elijah on the mountain of Horeb saw through the powerful displays of nature—a strong wind, an earthquake, and then fire—saw through nature, a new depth into nature in order to hear the still, small voice of God; so did Moses on that same mountain receive the Ten Words of God, the ten commandments written in stone, the principles or rules of holy living, of righteousness, and whose face shown brightly after this encounter with pure holiness Himself. And so did Peter, James, and John (the same three that Saint Mark will show as present with Jesus on the night before He died in the Garden of Gethsemene) perceive Jesus brighter than the sun, and He was not reading the scriptures written by Moses and Elijah—no, He was in conversation with them, talking with them. The relationship between Jesus and the most important, dominant and revered voices of Jewish religious tradition was active, was alive, was a divine ferment.

All of the disciples knew Jesus of Nazareth as a man, that is, knew Him in His humanity. They knew Him as a man who taught with authority they had never experienced, a teacher who brought alive the rich Jewish tradition of creation, prophesy and wisdom, made it palpable, made it real, made the mighty acts of God actually present again. That phrase “actually making present again” we must associate with the Sacrament of Christ’s Body and Blood, because when Jesus said “Do this for the remembrance of me,” the accurate translation is “Do this for the actually-making-present-again of me.” The Eucharist recapitulates creation, prophesy and wisdom

This is the transformation, the true miracle, the metamorphosis, that is Jesus, and that Jesus gives us as His gift. Healing to restore people alienated from the community to their place within religious life of the community; the possessed are released of their demons; the wounded are given power to serve others, to love others, and to proclaim the power of Christ, as disciples bearing the Cross of Christ.

So the transformation, the metamorphosis of Jesus on the holy mountain has everything to do with the Cross. The Transfiguration is the key to approaching the Cross. The Cross reveals to us the same unfathomable depth of reality, of consciousness, of meaning that Jesus transfigured revealed to Peter, James and John, and how Jesus revealed to the disciples through his miracles of healing. Just as Saint Peter’s mother-in-law in being healed was lifted up, which in the Greek is the same word for resurrection, to be healed is to participate in the resurrection of Christ, Who is the light of reality, and that is a mystery we must have in our hearts in the coming season of Lent in our pilgrimage to the Christ crucified on the Cross.

A blind man named Bartimaeus said to Jesus, “Master, let me receive my sight.” And Jesus said to him, “Go your way; your faith has made you well.” And immediately he received his sight and followed him on the way. Brothers and sisters, let us do the same.

ALL SAINTS’, MORTON
11 am Sunday Mass