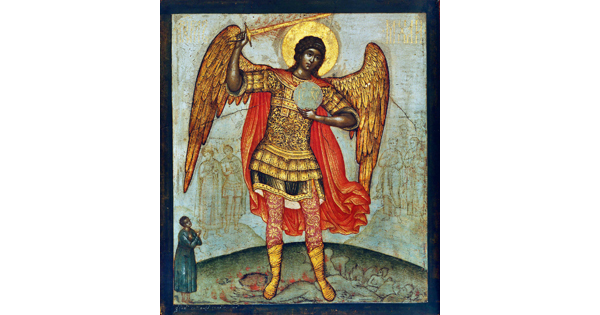 Offered by Father Matthew Dallman, Obl.S.B., for the Parish of Tazewell County, on the Feast of Saint Michael and All Angels, 2017.

The Feast of Saint Michael and All Angels has historically in English tradition been an occasion for great celebration and revelry. Coming as it does in the heart of the harvest season, food always played a significant role in the popular piety surrounding this feast. This explains in part why the nickname for this feast in English tradition is “Michaelmas.” There is a play on words in there, because while “Michael” in this pronunciation refers of course to the Archangel Michael, or more traditionally, “Mick-aye-el,” it also refers to a now archaic word in the English language, “mickle,” which means “much” or “large amount.” There is no more efficient way to a person’s heart than through the stomach, and so the culinary plenitude associated with this feast, along with the linguistic playfulness of “mickle”-mas are two reasons why it has been disproportionately celebrated in English Christianity, particularly in the Medieval centuries. Is it any wonder, then, why God has guided us to our post-Mass celebration we today christen as the first annual “Tazewell Parish Pie-Luck”? Everlasting God, you have ordained and constituted in a wonderful order the ministries of angels and mortals . . .” and pies both savory and sweet, I am sure the compilers of our Prayer Book thought to include.

We celebrate today the Holy Angels, who always serve and worship God in heaven, and help and defend us mortals here on earth. The biblical accounts in both Old and New Testaments are filled with angels from Genesis through the Revelation—encounters with the angels, affirmations of their existence, descriptions of their ministries. Angels are spiritual beings without body, and their numbers are thousands upon thousands, which is the biblical way of saying they are innumerable. They are named because of their activity, which is primarily to make accessible to our awareness the will of God. In various ways, angels are God’s “announcers,” about important events, including the conception and resurrection of Our Lord Jesus Christ. And while we are not destined by God to become angels (because the People of God will be resurrected with our bodies) we can learn from them and in a significant way imitate their ways.

And let us also know that the angels are watching us, and reporting our activities to God. “We have become a spectacle to angels,” Paul writes in his first letter to the Corinthians. They watch not only our outward behavior, but the inward behavior of our thoughts, emotions, and prayers. They watch us to help us grow in our relationship with God. What the Angel of the Lord did for Jacob was throw him into a state of awe and wonder, what is known as “holy fear.” This also happened to Moses at the Burning Bush, when an Angel appeared to him in a flame of fire. Moses in that moment was made aware of his vocation, his mission, even the Name of God as “I am who I am.” The holiness of this moment is unspeakable.

Of the many other examples in the Bible of encounters with angels, the most important for us must be Mary’s encounter with Gabriel as captured in the Gospel according to Saint Luke, which we celebrated in our opening hymn this morning. For what the Archangel Gabriel announced to Blessed Mary—first that she was full of grace, and in the same revelation, that it was God’s plan for her to be the Mother of God was of such holiness, had such cataclysmic impact that Christians have been singing, praying and celebrating this moment everyday for the last two thousand years. The title she was given in the early Church of “Ever-Virgin” refers of course to her chastity but even moreso to the belief that she was ever-aware of the angelic presence in the world and in her heart.

Indeed it must be said that there are in one sense two kinds of Christians. Those who fight in the light, and those who fight in the darkness. The first is always conscious of God and of the ministries that God employs to bless and influence their lives. Whenever they are afraid, the angelic presences rise up to reassure them, and whenever the cause looks desperate they turn to the mountain, and there are these heavenly hosts of the spiritual life. The other kind knows nothing of it all, and they fight a despairing battle; their hearts full of fear—not holy fear, but constant anxiety. Which then must be the safest and strongest life?

Brothers and sisters, we are told in scripture about the angels not for nothing, but for practical purposes. They exist, and we profess their existence every Sunday in the Creed in the words, “of all that is, seen and unseen,” for the angels are unseen yet they exist, is the ancient teaching of the Church. They minister everywhere and in all things, because “Every visible thing in this world is put under the charge of an angel” is another ancient teaching of the Church. And so as we always and everywhere give thanks to God, Father Almighty, creator of heaven and earth—as we sing Holy, Holy, Holy to our Lord God of Hosts—as we join our voices with Angels and Archangels and with all the company of heaven who are present here in their multitudes, called to the Supper of the Lamb—let our hearts be opened to the vast and unimaginable power of our loving God. Angels have been revealed to us, so that something of heaven itself can be known to us in this life, and take a place in our imagination, in our mission, and in our hearts. Amen.

ALL SAINTS’, MORTON
9 am Sunday Mass