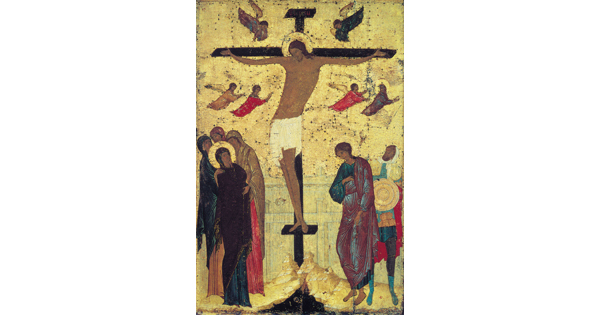 Offered by Father Matthew Dallman for the Parish of Tazewell County on the Second Sunday in Lent, Year A, 2017.

Our Lord tells Nicodemus that “so must the Son of Man be lifted up, that whoever believes in Him may have eternal life.” Our Lord hung on the Cross, nailed to it, as the true Victim, as God’s love for us, that we might be saved by His love. It is for this reason that everything in the Church’s life and prayer revolves around the Cross, itself an inexhaustible source of grace. As is well known, Jesus spoke seven sentences from the cross as recorded in the Gospels. These seven sentences are called “The Seven Last Words of Jesus,” it is a common tradition to devote preaching and reflection to these Seven Last Words on Good Friday services. I will be doing so today and over the remaining Sundays in Lent, tying these Words into the appointed Gospel readings and the ongoing life within the Parish of Tazewell County.

The first word uttered by our most compassionate Jesus, as he hung on the cross, was, “Father, forgive them; for they know not what they do.” There can be no more dramatic demonstration of the centrality of forgiveness to the Christian life than this first word. Jesus is asking His Father to forgive the actions of His murderers, to overlook their deeds. Jesus knows that His Father always hears Him. He is saying: Look, Father, at the love of Thy Son, not their behavior. Through the Son’s plea, indeed through the Son Himself, those who were responsible for nailing Jesus to the Cross are made present to God the Father, and God the Father made present to them, through Jesus. Forgiveness has everything to do with presence—and particularly with the presence of Jesus.

That forgiveness is central to the Christian life is demonstrated by how it echoes throughout the Mass. By plainly reading of the words of the Mass, forgiveness shows up explicitly in four places, and it is worth noting them now. There is a fifth location where forgiveness is prominent, perhaps its most prominent moment, that is somewhat hidden and does not appear in the plain words of the liturgy, but is directly alluded to; this fifth location we will look at later in Lent.

The first instance of forgiveness is in the General confession of sin which begins the Mass. Amid our confession of sin—of separation from God—as a body, we petition God to “Have mercy on us and forgive us.” We ask this so that we might again delight in God’s will and again walk in God’s ways. We have lost something of Christ’s immediate presence, a presence that guides and leads us in our lives, a presence that directs us in our journey. And the Priest responds: “Almighty God have mercy on you and forgive you.” When we ask for forgiveness as a body through the means that the Church provides us, our separation is removed—God is most willing to do that, most willing to restore and renew His presence and availability to us.

The second instance where forgiveness shows up is in the Nicene Creed: “We acknowledge one baptism for the forgiveness of sins.” This Creed took final form in the fourth century through a council of Christian bishops east and west, and so it is seen as one of the most ecumenical fruits the Church has been given by God. Here forgiveness is seen in a different light than it was in the Confession. Here it is connected to baptism. Baptism is permanent; it can never be undone nor can it be re-done. Being baptized in some sense permanently removes a certain kind of separation from God, and likewise through baptism God is made more present in the person who is now incorporated into the Body of Our Risen Lord Jesus Christ, that person’s own body now being a temple of the Holy Spirit.

The third instance of forgiveness in the Mass is during what is called the Words of Institution. Holding the prepared Chalice, the priest repeats the words of Our Lord: “This is my Blood of the new Covenant, which is shed for you and for many for the forgiveness of sins.” Forgiveness is intimately tied into the nature of the Eucharist, and at the heart of Holy Communion. By the consecrated Bread and Wine—the Precious Body and Precious Blood of Jesus—Jesus is really and actually present, palpably, tangibly and sacramentally—and this presence is for the forgiveness of sins. By the Eucharist, we are completely un-separated from God. This mystery requires our utmost reverence, our best prayer.

The fourth and final plain instance is in the Our Father prayer: “And forgive us our trespasses, as we forgive those who trespass against us.” Note that we are agreeing to a contract, you might say. The contract that we enter into by our own free will is that God’s forgiveness of us is contingent upon our forgiving of others. Our forgiveness of others precedes, it comes first, says the contract. This is a condition that we place on ourselves. Yet we do so because we know that we have no power in ourselves to help ourselves: it is all grace, it is all a gift from God. When we truly forgive another person, it is owing entirely to God’s presence in us, His action in our souls.

Cover image “Crucifixion of Jesus” by Dionisius is licensed under CC BY 2.0 / Cropped from original.

ALL SAINTS’, MORTON
9 am Sunday Mass